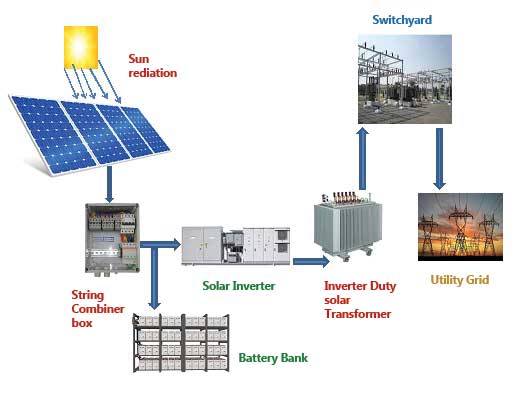 What Is A Solar Transformer?

For example, solar applications experience steady-state loads during inverter operation. When the sun comes out, the reaction process will be weakened and the load on the transformer will be more constant.

In addition, fault ride-through has not been defined for photovoltaic systems. This may be because it is easier to turn solar systems on and off quickly, or because regulatory requirements have not kept up with young technology. This may change in the future.

In terms of harmonics, the typical harmonic content of the inverter is below 1%, which has almost no impact on the system. The lower harmonic distribution is due to the absence of generators and switches and protection controls, such as those on wind turbines. Solar transformers do need to be boosted. However, the solar inverter converts the DC input from the photovoltaic array to the AC voltage of the transformer, smoothly transitioning, and no load circuit overvoltage. Since the solar transformer operates at a stable voltage and the rated voltage is controlled by the inverter, the voltage and load fluctuations are much lower than those of wind turbines. The photovoltaic system is also operating close to its rated load.

Solar energy systems also have special design issues. Since the size of the largest solar inverter is about 500 kilovolt-amperes (kVA), designers built a 1,000 kVA solar transformer by placing two inverter-connected windings in a box. The transformer must have an independent winding to receive a completely independent input. The design problem also stems from laying cables over long distances to convert direct current to alternating current.

Restrictions on the size of the inverter also limit the size of the photovoltaic system. It is very difficult to increase the size by adding more solar inverters in a transformer box. With the required chassis size and the wiring that converts direct current to alternating current, things get complicated.

The key to a solar transformer is to understand the variables in each system. Transformer needs to be customized to work with each specific system. Inverter technology is progressing slowly, and it remains to be seen whether this comparative disadvantage will become a fatal flaw in the advancement of solar technology to the same level as wind farms.

Electricity is generated by converting solar energy into direct current using photovoltaic (PV) cells. The generated direct current is converted into alternating current through an inverter, and the alternating current is connected to the grid through a step-up transformer. The international standard applicable to DPV power generation transformers is IEEE C57.159 2016 “IEEE Guidelines for Application Transformers in Distributed Photovoltaic (DPV) Power Generation Systems”. Currently, the rated power and voltage level of the inverter system is limited, so one or more inverters are connected to the secondary of the same number of step-up transformers. Although the most common configuration is 2 to 3 secondary, 6 secondary transformers are also currently manufactured. Inverter manufacturers are now developing inverters with higher power and voltage ratings, which will increase the transformer MVA rating and reduce the number of secondary windings required in the future.

The development trend of photovoltaic transformers

Due to the use of renewable energy distributed power generation systems, the use of a large number of non-linear loads, electric vehicle (EV) charging, etc., the complexity of the power grid is increasing rapidly. At the same time, the demand for multifunctional and “intelligent” power grids has promoted the development of the “smart grid” concept. It is inevitable that the power grid will undergo earth-shaking changes sooner or later, and a “smart transformer” is needed in the future. Renewable energy transformers are no exception. The next generation of renewable energy transformers must be combined with the needs of smart grids. Below is information about the characteristics of these transformers.

• Smart grid and customer needs: Smart grid requires transformers to have a variety of unique characteristics and functions, for example,

1) Harmonic isolation and filtering: non-linear loads produce harmonics, and the transformer should be able to maintain a clean output waveform

2) Voltage sag compensation: The current distribution transformers and systems cannot correct the voltage level to ensure a constant voltage at the user terminal. Future transformers should have this characteristic.